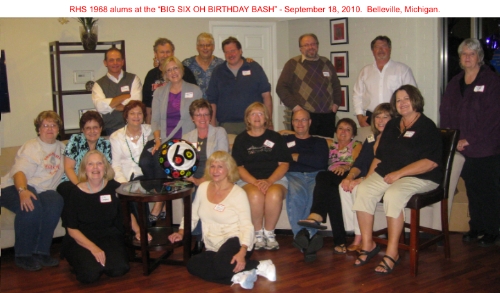 Go ahead, ZOOM in and see how much we’ve changed since school days.  THAT’S Barry Weisswasser??  OMG!!


We all needed to wear name-tags because we are all now SIXTY and some of us don’t remember names too good from 40+ years ago.   The name-tags were very helpful identifying the person wearing it.  Besides, there were 800 students that graduated from Redford High School in 1968, How ya gonna remember 800 names???  To help us with that, Vickie Hammer and Gary Perrine brought their 1968 Blazer yearbooks that has all 800 grads in it.  Of the 800 alums, 40 some of those have passed, (may they R.I.P.).  That means 760 of us are still out there somewhere… all over God’s creation known as our dear Mother Earth. 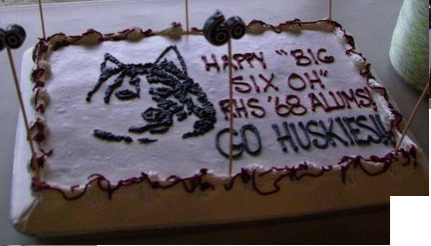 If you were born in 1950, YOUR BIG SIX OH Birthday Milestone has already happened or WILL prior to Jan 1, 2011!  Further, a handful of Redford High School Alums from the Class of 1968 enjoyed a party last Saturday night to “jointly commisserate” this great milestone.   We all sang “Happy Birthday to US” after first warming up listening to the Beatles “You Say Its Yer Birthday”… then we turned down the lights, held hands, sang “Goom-Bye-AH” and cried. It was…. touching…Then we drank more beer, danced, sang group kareoke tunes and had a “boogaloo” dance contest…all into the wee small hours of the night.  Unlike previous reunions, no one called the cops on us for ‘disturbing the peace’  even with 90 decibels of racket on the boom box that Geri Hamlin kept fired up.  The place ROCKED.  Typical of ’68 , eh?   Wow, NO ONE had to take a time out for a NAP, either!  Impressive!

Here is a snapshot of the cake we all enjoyed
Kudos to RHS ’68 Alum Vickie Hammer Parker for her efforts to procure this awesome sheet cake. Thanks to Pat O’Dell Macauley, who attended RHS in 1966, for snapping this photo and posting it on Facebook.